January in Review: It’s Almost Over!

Happy New Years! We hope this newsletter finds you well. In here, you will find lots of content- some of it fun, some of it practical, none of it all too serious. The nature of involvement with activism here means voluntarily exposing yourself to one of the worst ongoing human rights crises in the world today, and it’s been a rough few weeks.
We don’t expect that this newsletter will end the occupation, but the horoscopes are fun, centralized communication is good, and its been a fun little project for all of us involved. We hope you enjoy!

With this section, we hope to give a space for looking back, reflecting, and giving a small pat on the back for the accomplishments of the collective.

New Year, New Strategies
This Month, ATL members came together to assess the crucial process of onboarding to see how it could be improved. After weeks of deliberation and planning, they were able to create a new, expedited process to welcome new members in the warmest way we can. Want the details? Sign up to come to the Big Meeting on January 27th!

All That’s Online
This month was another great month for ATL’s online presence, following and helping shape online discourse trends as they come. At the beginning of the month, when the hot discourse was Emma Watson’s Instagram post, ATL member Em Hilton wrote a great piece about it. If you don’t already, follow ATL on Instagram, Facebook, and Twitter.

January in Umm al-Kheir
Our partners in Umm al-Kheir have been facing a particularly difficult month and have been requesting an international presence in the village. Throughout the month, members of ATL have been volunteering to show up and do overnights at the village through this difficult time. This request is continuing into the coming month- for more info, view the Signal groups for postings.

January 18, and Sheikh Jarrah
The crisis around the eviction of the Salhiye family was another one of the harder struggles ATL members were involved with this month. Throughout all of it, members of ATL did their best to show up in whatever ways they could- answering calls to appear at the house when it was under threat, protesting in the days before and after, and spreading the word on social media to elevate it to awareness on the international scale.

Especially of note is the speed and care that was put into fundraising for the Salhiye family after the demolition. When there were problems with Paypal, members of ATL rushed to seek out alternative ways of receiving donations while the topic was still in the public eye. The communal effort for fundraising, clothing donations, communications, protest, and documentation is this year’s first example of the ATL community coming together to help fill needed roles in the struggle against occupation. To everyone involved- thank you.

To donate to the family, go to the fundraising page on Non Violence International.

On The Ground: All That’s Going On

Want to sign up for something but can’t find the link? Did you mute the Signal groups and missed out on something important? No problem! With the ATL Newsletter all your organizing needs can be found right here, in one centralized place!

Join the Big Group on Signal for updates on most things you’d want or need to know! Make sure you have signal downloaded, and you can join using the QR code. 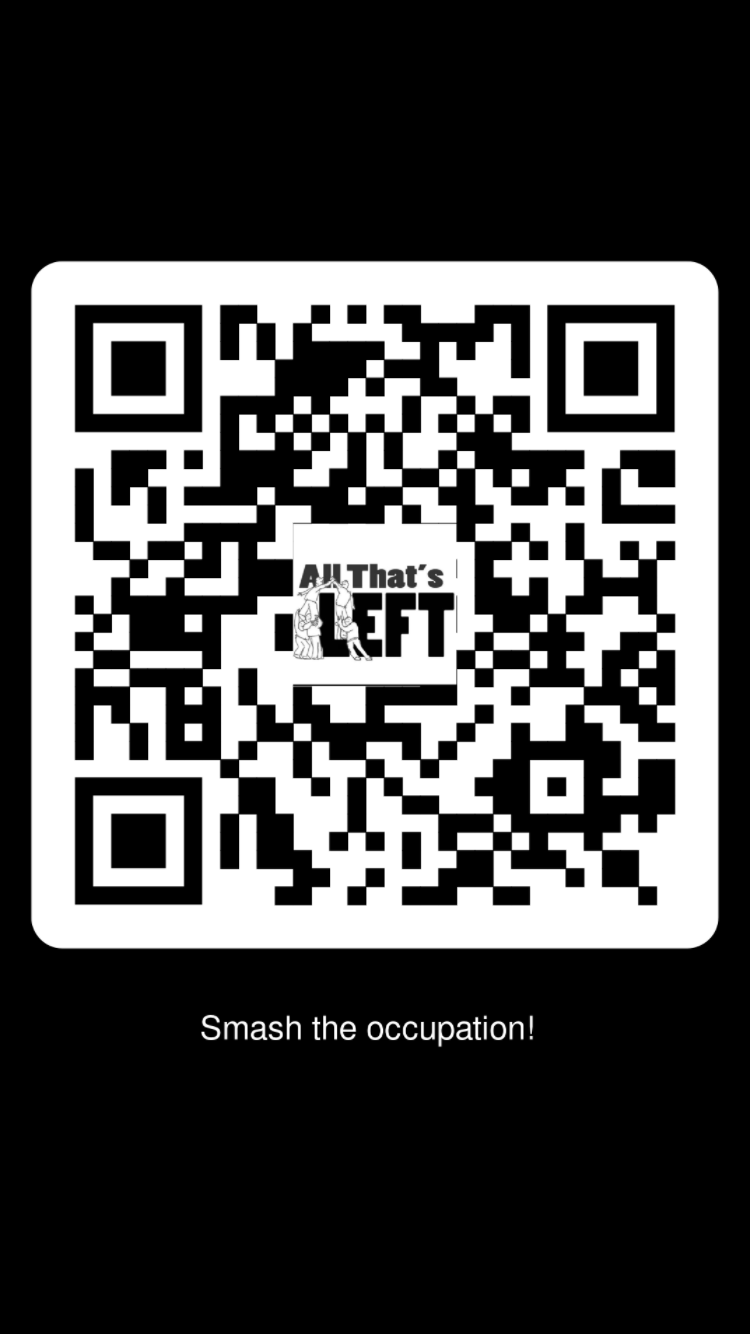 The first Big Meeting of 2022 will be on Thursday the 27th in Jerusalem. Sign up here, and we hope to see you there!

Part 2 of the Community Safety and Sexual Violence Training with the Jerusalem Rape Crisis Center will be held on February 4th. This training is an important opportunity for each one of us to receive tools and knowledge to be better community members and to build a stronger, safer collective. Register at https://forms.gle/3n8RKju1EBhFvFD76

This Is Not an Ulpan: Registration is now open for TINAU’s Winter Semester! Learn Hebrew or Arabic in Tel Aviv, Jerusalem, or from the comfort of your home with online classes. Go to thisisnotanulpan.com for more information. Use the code ATL10 when signing up for a 10% discount!

Coffee Dates: Are you new to ATL and wondering how you can get involved? Have you been with ATL for a bit now and feel like you can provide some answers? Alternatively, do you like coffee? Help bring community to the collective and sign up for a Care Committee
Coffee Date!

All That’s Write, the official blog of All That’s Left (this website) is back online and accepting submissions! Anyone can send a piece they’ve written, of any kind, to be posted on the blog. Details about submission, content, and non-hierarchical editing structure at the Big Meeting 🙂

After weeks of coordination, we managed to secure a sliver of time to interview Jerusalem’s heartthrob, Daniel Roth. We asked him a bunch of topical fun questions.

Sadly for all of us, you’ll be leaving Jerusalem for a few months. You’ve been here for a while- what should be on everyone’s Jerusalem Bucket List?

What is a good memory you have from your time in ATL?

What is an accomplishment you’re proud of, in life and in organizing?

Justin Bieber or One Direction?

Explain the Israeli Occupation of Palestine in 30 seconds.

That was so well said. Next question- FMK: Bush, Obama, Trump.

Hobbies you currently do or would like to do?

One nerdy movie for non-nerds?

Parting Words for the adoring masses of ATLiens?