I had long admired the struggle of Bil’in, a small Palestinian village in the central West Bank. The people of Bil’in had begun organizing demonstrations in 2005 to protest the construction of the Separation Barrier, which had cut the village in half and confiscated most of its farmland. Amidst night raids, disproportionate violence, and constant intimidation, they carried out peaceful Friday protests every week. Bil’in had become an important symbol of the Palestinian resistance – and a central site of solidarity activism.

So I picked up the phone and called Roi.

“Yeah, let’s do it! But what do you think about Nabi Saleh?”

“Don’t people get shot in Nabi Saleh? I don’t want to get shot.”

We spoke for a while and eventually resolved to consult some (more experienced) activist friends. Conversation led to conversation, and the trip to Bil’in soon grew beyond ourselves. Roi and I approached All That’s Left and managed to assemble a large group of young Diaspora anti-occupation activists interested in making a solidarity visit.

We developed a buddy system of more experienced activists who would pair up with first-timers and shepherd them through the process of checkpoints and tear gas. We established contact with Palestinian village leaders, who invited us to meet them before the demonstration for a short presentation on their history of occupation and activism. And we figured out the carpool plan.

I picked up the phone and called Roi again. “I’m really scared of getting tear gassed.”

“Well, why don’t we go pick up some pepper spray and I’ll pepper spray you? That way, you’ll get desensitized before it even starts.”

[The Day We Went to Bil’in]

Some of us had to enter the checkpoint by foot. With a sense of false confidence, I offered to lead a few new activists through the crossing. I suppose I did feel most comfortable with Hebrew.

A soldier approached and demanded, “Where are you going?”

“We have some friends in Talmon [a settlement]. We’re going for a quick visit before Shabbat.”

And we were through.

We hopped in a waiting car and made our way through the Palestinian village, winding through narrow streets and backing up occasionally for tractors. I saw a small convenience store and breathed a sigh of relief. At least there will be Diet Coke.

The village mukhtar was quick to direct us to his home. We only had a little bit of time to use the bathroom and drop off our things in the courtyard. Soon, we were in another van, driving toward the place where the Separation Barrier meets Bil’in. It was a beautiful unbeautiful place.

“You see those houses up there in the settlement?” My friend pointed to the telltale red roofs beyond the Wall. “That’s where my sister lives.”

There was already a Red Crescent Ambulance waiting when we arrived at the weekly demonstration. A group of Palestinian protestors were gathered with Palestinian flags, preparing to march up to the Separation Barrier. Yalla, they montioned to us, let’s go.

So there we were, thirty or so Diaspora Jews, gathered to protest the occupation in Bil’in. Wearing just our sneakers and our privilege.

The streams of tear gas would have been beautiful had they not been so toxic. One, two, three, flying in perfect arcs from the top of the Wall down into the grassy fields.

Try to guess the trajectory of where the canister is going to land.
Calculate the blowing of the wind.
Then walk, don’t run, in the opposite direction.

I mostly stayed towards the top of the hill, far away from the Wall, afraid to breathe. But my friends advanced slowly but surely into the fray.

They returned to us from the bottom of the hill,
eyes puffed, almost folded inward.
Jewish day school kids
bathing in this odd ritual.

I felt guilty because I was afraid to get too close. Afraid the tear gas might suffocate me, or give me a stomach ache, or cause an allergic reaction. My hypochondriac tendencies spilling into Bil’in didn’t do anyone any good. But then, it wouldn’t really make a difference if I were tear gassed or not. The Palestinian residents of Bil’in would continue to sputter in their poisoned air.

A canister landed to my left and a small boy waded
into the thick fog slowly, bandana around his nose,
reached down, picked up the canister
and threw it back against the Wall.

Eventually, vaporous irritants overwhelmed the air. Our group of Diaspora Jews and other assembled international activists retreated, afraid to approach the Wall yet again. Soldiers atop the Separation Barrier pointed their weapons in our direction.

A Palestinian activist approached us in Arabic, enjoining us to move.

No one responded. I turned to my friend and whispered, “Jewish day school kids from Long Island. Not exactly the easiest crowd to rally for this kind of thing, huh?” She giggled.

“Scared! Let me ask, where are you from?”

There aren’t enough exclamation points in the world to paint the look of surprise on his face.

He pointed to the soldiers sitting atop the Wall.  “Yalla, then you go talk to them and tell them to stop shooting the tear gas! Tell them to stop what they’re doing! They’ll listen to you! Go tell them!”

Where would I even begin? All I could muster was, “We’re trying, we really are trying.” 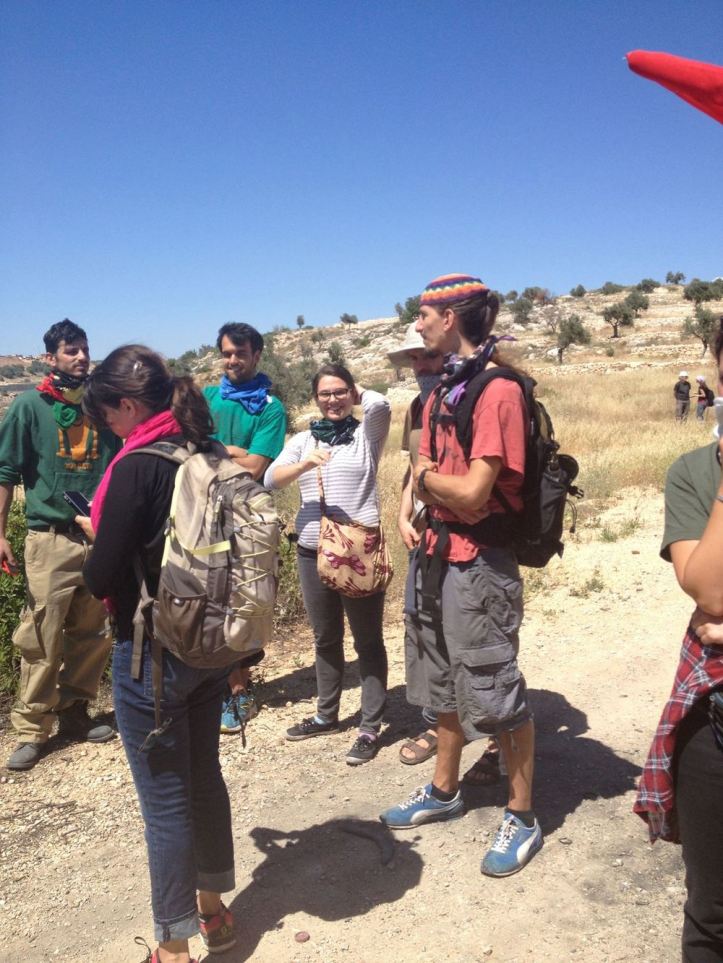 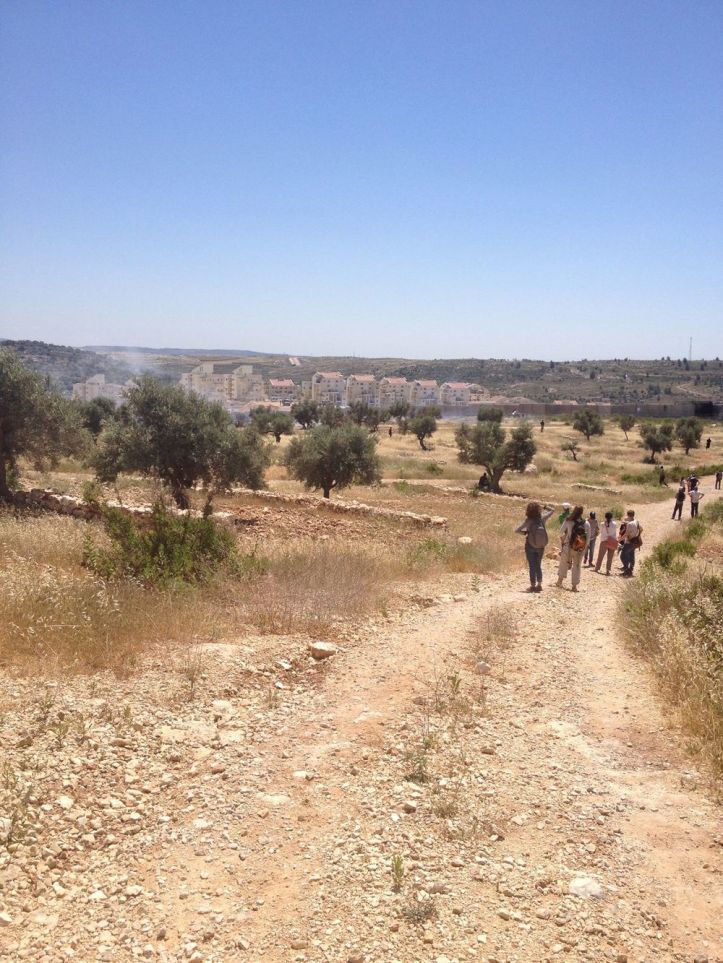 On the way back from Bil’in, I volunteered to cross the checkpoint by foot again. But this time, things got a little bit messed up. (If I had a dollar for every messed up checkpoint story.) As I approached the checkpoint, a Palestinian man was facing off with an Ethiopian Israeli soldier.

“Please, I have a permit just for today. I have a business meeting in Tel Aviv. My colleagues are all waiting for me. I can’t go any other day,” said the Palestinian man.

The soldier responded. “The checkpoint is closed. Go home.”

“But look, I have a permit for today.”

“The checkpoint is closed. Go home.”

The Palestinian man chatted frantically on his cell phone, telling his colleagues that he was stuck at the checkpoint. When he saw me approach, he asked if I could intercede on his behalf.

If I did that, I would be far less likely to get through the checkpoint myself. But if I didn’t, what would that make me?

At the same moment, the Israeli soldier approached me. “Where are you going?”

I answered in English. Best to play “dumb-American-Jew” on the way back.

He took my passport. “Can you tell him in English that the checkpoint is closed? He doesn’t seem to understand me.”

So now I was plopped right in the middle. And the Israeli soldier was walking away with my Passport.

I turned to the Palestinian man. “He says the checkpoint is closed.” In a lowered voice, “I wish I could help you, but I don’t think there’s anything I can do.”

“Can you tell him that I have a meeting in Tel Aviv? And I have a permit?”

I looked to the side. The soldier was conferring with his comrade in arms, both inspecting my passport.

The soldier returned and handed back my passport. He pointed to a room off to the side. “Go in there.”

Then he turned to the Palestinian man. “I thought I told you to go home.”

The man looked at me expectantly.

“He says he has a meeting in Tel Aviv and he has a permit?” I said.

“There is nothing I can do,” the soldier replied. “The checkpoint is closed.” And then he waved me through the checkpoint.

But I had actually been waved into a small military office. Two soldiers waited with metal detector wands and one of those rolling baggage detectors. I put my backpack on the conveyor and they began to question me. This time, I chose to speak in heavily accented American Hebrew.

“Where are you going?” they demanded.

“Jerusalem! And I’m really in a rush because I need to catch the bus before Shabbat. I’m trying to get to services and then Shabbat dinner.”

I started to swing my backpack onto my back, and suddenly, the woman soldier perked up like she had forgotten something.

“What were you doing there?”

“Just visiting…actually, I’m thinking of making Aliyah, but I’m spending a year here first to check it out. And I’m learning Hebrew, slowly, slowly. But I really need to get back to Jerusalem before Shabbat, and I really don’t want to miss my bus!”

She smiled. “Okay, you can go. Shabbat Shalom.”

But I had missed my bus.

Why did we go to Bil’in? Why did we run into the tear gas? Why did we contemplate spraying each other in the face with pepper spray? It struck me as bizarre, these American, Canadian, British Jews, stumbling through this militarized obstacle course. We had made a conscious decision to go to Bil’in, and I was wearing a pink shirt from Ann Taylor Loft.

I know that when internationals (and maybe especially Jews) attend a West Bank demonstration, the rules of engagement change. The army becomes gentler, more lenient. This was a valid reason for us to be in Bil’in.

I know that the Palestinian residents of Bil’in had invited internationals to join them in solidarity with their struggle. I know that, through a member of All That’s Left, we had established a solid connection with the village leaders, who had invited us to join them. This was a valid reason for us to be in Bil’in.

But if thousands of American Jews joined those protests, American Jews would know. Protesters would return home with videos to show their synagogues; hawkish parents would be appalled by the treatment meted out to their children.

Because, sadly, American Jews really do care more about their American Jewish children than Palestinian children. It means more to them if we get pummelled, or killed. And that, too, would have been a valid reason for us to be in Bil’in.

But sometimes I wonder if we also went to Bil’in out of guilt. Did we imagine that our puffed up eyes would absolve the oppression perpetrated by the heels of our feet?

Did we go because we needed to feel the pain enacted upon Palestinian bodies? Because we wished it had been us, instead of them?

Did we go because we needed to feel something, anything?