This post is dedicated to Mohammed Sami al-Kasbah, 17 years old, killed July 3, 2015 by Israeli soldiers, and to the all the other lives cut short by the Occupation.

When movement is restricted and monitored, simply existing somewhere becomes an act of resistance.

They killed a man. Nineteen year old Ahmad Ibrahim Najar was killed by Israeli soldiers on the evening of February 1, 2015. He was shot directly in the face, the live ammunition leaving his body through the back of his neck, meters away from a newly paved road running through his home village of Burin to the nearby illegal Israeli settlement of Bracha. His six brothers and sisters have been robbed of their eldest sibling; his mother and father have had their oldest stolen. His youthful energy, dreams of the future, supplementary family income, and helping hand have disappeared, at the hands of soldiers his same age. The Israeli jeeps were watching, waiting on the road for something to happen, and they killed a man.

Thousands of people attended Ahmad´s funeral on the morning of February 2, 2015. Hundreds of women were crowded in the front garden of the Najar family home, packed tightly in the small courtyard like blades of grass in a small field. The soft murmur of Arabic conversation was barely audible over the moans of desperation, the cries of pain and sorrow, the gasps for air between tears. Their faces and eyes sunken with the weight of generations of grief; of the weight of living under an occupation which robs them of their husbands and brothers and sons and fathers to indefinite periods of incarceration without charge or sentencing, to injury or handicap, to murder. Every woman in Palestine has a story, a story of surviving and continuing to provide and care for their large families against the smallest odds, with little outlet for support or escape. As heartbreaking as their stories are, I always manage to catch a glimmer of hope in their eyes, a faint reflection in their self-perception echoing the deep determination and survival of spirit these women unwaveringly possess. But, this morning, under the full blue skies and heavy sunshine, there was no such glimmer, no light. It was as if their eyes had shattered, the pieces ground to powder, so not even the powerful rays of the late morning sun could cause a reflection. Eyes sunken deep in their skin, finally succumbing to the power and pressure of the brutal force of the occupation, beating down on them harder than the sun. The wrinkles of the village elders cracked in the dry air, as rivers of tears split the lines in their once beautiful faces. And together they wept; wept for all of their lost sons, fathers, husbands, brothers;  for their lost freedom and their increased responsibility; wept for their dissipating hopes for future redemption. Yet their tears carried rage, and as Ahmad´s body was carried through the crowd to his family home one last time, moans became screams of agony and anger at the murder of yet another Palestinian, hands reached from the masses to touch his cold, deceased skin, grab hold of his death and memory and carry it, remember the feeling of lifelessness to spark the overwhelming fires of resistance to fight for inevitable liberation. I shivered under the blazing sun, and felt the warmth of tears consume my face, as bodies shook together in mourning anger. Ahmad´s father fainted, collapsing into the crowds, and arms rushed over heads pouring and spraying ice cold water on his anguish, shocking the warmed skin of the mourners like a piercing stab to once breathing and smiling life. A woman next to me shook and sobbed; I reached for her hand under the arms of others, and she squeezed it limply, yet with strength.

After the funeral procession and burial, a boy, around 13, from Burin walked with us to the site of Ahmad´s death. The sun glared down at the slow procession of village residents strolling solemnly to the road, like ants crawling in small groups towards an unknown destination. Amongst us were four Palestinians, including a middle-aged woman and our young local guide, and four internationals; silence filled the non-threatening group. As an Israeli watchtower stared down at us from the hilltop, we spent about 10 minutes breathing slowly as we repeatedly walked between the Israeli body bag left behind and the short fence separating the outskirts of Burin stone roads from the smooth black pavement of the Israeli road. A patch of the white pebbles and stones of the slight incline was dyed with the deep red of Ahmad´s blood, pooled in a smear a few feet down the incline. Minutes passed slowly before an Israeli military jeep sped down the road to where we were standing, and three Israeli soldiers emerged, climbed over the low fence, and walking quickly, escorted us off the stone road. They stood at the base of the incline, where the path met the larger Burin road, and watched, as pairs and trios of Burin residents slowly walked towards Ahmad´s memory, before turning back upon seeing the newly erected surveillance point. Movement restricted, an oppression quite familiar to Palestinians living under occupation, and paying of their respects to their deceased denied. Only Ahmad´s blood, the last glimpses of his body above earth, like the true blood of a martyr, resisted these restrictions. I clutched a small pebble I picked up from the road, in the rough shape of a future free Palestine, and wondered if the soldiers saw me pick it up, if they perceived it as a weapon, if Ahmad´s blood would ever wash away, if his memory would outlive the rainy season.

The speeding service (shared taxi) rushed to a stop on the side of the road, and we piled out of the car. We had decided to go for a walk, to try to take a break from the stifling pressure of the Occupation, and enjoy the sunshine. But the occupation is not something you can walk away from, no matter how far into the valley we hiked.

Wadi Qana is a stunning valley located in the North of Palestine; we wandered its lemon and orange and olive trees south of Nablus. The fertile valley is beginning to show the signs of spring; fields of yellow and red poppies welcomed us from the main road, white cherry blossoms covering the trees. Lines of trees and orchards staggered the surrounding hills, especially fruitful nestled in between the hills and exposed to direct lines of sun, and the slow stream of the Qana River led us towards our destination, a spring not very far from the village of Deir Istya. Shepherds of goat and cows herded their animals slowly, enjoying the afternoon sun. 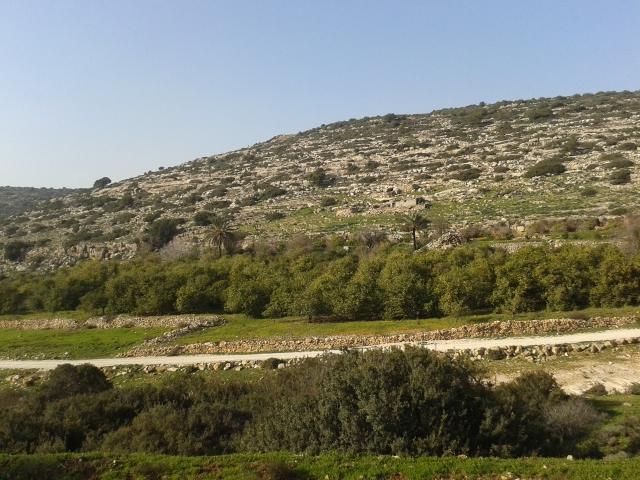 The particular region of Wadi Qana we were wandering is now essentially uninhabited, save for one family living amongst the orchards. All 350 former residents left in 1986, because life had become unbearable. In the hills surrounding the valleys, nine illegal Israeli settlements are continually expanding, seeking more and more land from the fertile Wadi to accommodate their colonial goals. On January 30, 2015, the Israeli government approved the construction of 450 new settlement units in the Occupied West Bank, including some 100 in one of the settlements surrounding Wadi Qana. Those that used to live in the Wadi have mostly moved to Deir Istya, a nearby village, which historically covered all of the land now colonized and confiscated for current Israeli settlements.

Former residents of the Wadi, and the land itself, has been subject to constant settler incursion and violence, including the uprooting and destruction of trees and crops. The sewage from Israeli settlements flowed directly into the Wadi for 12 years, polluting the land and sight, before a pipe was finally built to carry it above ground. Thousands of trees are marked with red stripes, signifying their assignment for future destruction by the Israeli state. The fate of some of these trees is currently being decided in Israeli courts, after Palestinian farmers fought against their orders for destruction. In 2010, Israeli forces destroyed water re-distribution infrastructure, and uprooted 3000 trees which had been planted on funding provided by the Palestinian Authority.

Wadi Qana has been named a ´nature reserve,´ and it is this so-called logic that is used to prevent Palestinian building or harvesting on the land. When legal challenges questioned why Israeli construction was permitted under this logic, the Israeli authorities changed the borders of their nature reserve so that all Israeli settlements fell outside. Aside from preventing Palestinian building and agricultural growth, the Israeli definition of ´nature reserve´ does little to protect the natural beauty of the Wadi. The illegal settlement of Imanu´el, built in 1982, has poisoned natural water sources, transforming a once active spring into a grey pool. A filtration-recycling station deters some of the sewage from entering the Wadi, although not all, and is fed primarily from Imanu´els properties and industries. Settlers have, on multiple occasions, damaged or destroyed the small infrastructure that still exists in the Wadi, be it aids in collecting and protecting spring water, or agricultural tools. Palestinians are not only prohibited from working the land, whose fields were once the main source of income for the village, but are also subject to severe restrictions on their presence in the area. Watched from all sides, any gathering is vulnerable to settler violence, or military interruption. A friend recounts a story from two weeks ago, when he brought his young children to to Wadi to ride their bicycles. Three soldiers abruptly arrived, loudly questioning his presence there, and demanding he get out of his car. He tried to explain that he was unable to, as he uses a wheelchair, but they did not understand. Another friend tells of a time when a couple of Palestinian families came to the spring to camp for the night, a trip which lasted a mere hours before they were evacuated by soldiers. Israelis, however, are permitted to picnic at all hours, or spend the night in the valley.

On this bright afternoon, we made a fire beside the spring, drank sweet tea, and ate pieces of cake. Discussing politics was a conversation which lasted only as long as our guides explained the situation facing the area; conversation quickly shifted to easier topics as we brought out ukuleles and more cake. A large Palestinian family was making a fire a few hundred feet away, and the father came to say hello, his young children running under the trees. Four young men carried hookahs (tobacco water pipes) to the shade under a lemon tree, and set up for the afternoon. In a valley which is often arbitrarily declared a ´closed military zone,´ and access prohibited to all Palestinians, this sunny afternoon is a rare moment of serenity and calm in the beautiful landscap

I have been searching desperately for a view of the Palestinian landscape, one which not only captures its powerful beauty, but does not have any settlements in sight. I have been searching for an image that paints the beauty, without the restrictions and surveillance, without any indication of colonization. I may not ever find it, and I certainly did not at Wadi Qana, despite it immense beauty, the colours of the rainbow streaked across the fields in blooming spring flowers. But, on this unusually peaceful day, under occupation, we are resisting restriction and declaring proudly, in between our sips of tea, that we are standing here, free.